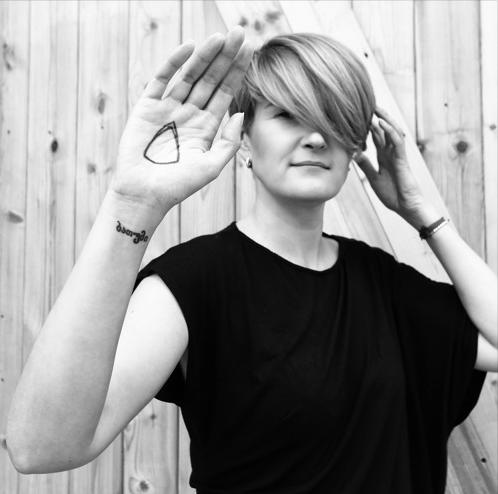 You have mentioned multiple times that you didn’t plan to stand behind the decks. When did you realize that you want to do it seriously? Can you imagine that it could have been different?
– Strange enough, but I can. And I’m glad it turned out this way. At first I wanted to shoot promotional and music videos, something not longer than 5 minutes. I still like the video, for many parties and clips I made promo videos myself. But I was lucky that music became my main occupation. Just as many others in 90s, I went to parties, DJs seemed like gods to me that transmit signals directly from space. Many of them became my friends later. And now I can send signals myself. Hope that from the other side there will allways be people who will need these signals.

Your parties Platz fur tanz and Debosch have been around for over 10 years already. How would you assess this period, what has changed during this time, what were the goals at the beginning and what are they now?
– Goals have not changed:  bringing electronic music to people. That’s why I agreed to start radio show Intelligent Beats almost 15 years ago. I had a huge collection of records, and most of the people I met did not know anything about the format, alternative to MTV or regular radio. I did every release with gratitude that I can talk about this music with a huge audience. And then the idea to do parties appeared followed with the opportunity. One party, another, in clubs, some alternative places.  It became clear that the parties outside the clubs are being more expected by people, they prepare for them especially. We began to make raves in hangars. So the development was dictated as by our desire to bring music to people, so with their desire to escape from the ordinary atmosphere into something special, different world.

Tell us how the idea of ​​ parties in trains Debosch Express appeared and how does it look now? Do you completely hire a separate train? Where does it go, how long does this party last and how do you negotiate with the railway managers, considering dancing on the seats, alcohol is likely there, and so on?
– My friend gave this idea, she gave life to it in the form of a closed corporate evening, and I picked up the idea and turned it into an annual tradition. Yes, it’s a whole train with its route in Latvia, there are 2 DJs in each wagon with it’s own stylistic. Everything lasts for 4 hours and then we go to the afterparty on the boat. There is alcohol, of course, but DEBOSCH EXPRESS is a special event, people understand it and vandalism is absent. On the contrary, there are paper towels everywhere, and people, droping a drink, immediately clean it. In general, it is a special atmosphere, it is impossible to express it, just visit and feel it yourself. There is specific vibe each year in the trian, none is worse or better, just another one and special.

You are the curator and inspirator of the Under Festival in Riga, which was organized for the first time last year. Can we consider that this has become a logical continuation of previous organizational initiatives? What were the hardest issues, as far as it’s always hard to start, and what changes will be this year, apart from the line-up, of course?
– There are several people in UNDER team, each one is irreplaceable and has it’s own mission. I’m basically responsible for what I can – I pick artists and bring music to people through communicaton in facebook and in life. In 2009 I already organized festival in Riga, it was called Aiziet! and united 20 Riga clubs in it. But frankly, it turned out to be too complicated for our city. In 2017, the festival’s attempt was done again and didn’t fail. A two-day festival in the city, in an accessible location with a strong lineup – people took it for hooray! The most difficult thing was to work with the team, everyone came not only with the love for electronic music, but also with their habits in organizing, but we learned to respect each other and hear each other, this is very important. Of course, there were million technical missteps, but all the artists performed, and the audience did not feel those inaccuracies. So we can say that we have something to be proud of, and of course, everything will only be better in the future.

Are there any other good places in Riga where you can hear techno-oriented music besides those that you organize, and what is the situation with venues / clubs for such events (like it once was in  Andrejsala port)?
–  City authorities took back Andrejsala after it was given to informal youth, unfortunately. There is just commerce now. By the way, when we were driven out of the place, they blamed us exactly in the same: we gave you space for creativity, but you created clubs here, making money. Now there is no place for underground, expensive cars and high heels instead. Paradox or calculation. But there are places, although much less in comparing with 2006. There is a club One One, the most promising techno-place of the city by atmosphere. There is Teritorija, it’s more about house music, Autentika and Kanepes Kulturas Centrs, the most alternative audience  is there and a full blend of styles. And, of course, we do not stop making parties in unusual places.

It seems, you had already opened a club in Riga once, was there any wish to return to this idea again?
– It wasn’t me who opened the club, I worked there as a booker of foreign artists. But after closing, I was more interested in pop-up activities, the club has less creativity, more routine.

As we know, you have your own bar in Riga? Do you organize events there as well?

– I sold the bar two years ago and moved to Georgia. But while it was in my hands, everyone danced there on the tables in the literal sense of the word. Of course, the bar for 50 people did not have techno-format, it was a vinaigrette of any good music, both live and electronic, but it was always fun. We also named the bar “Fiesta”, a holiday, in honor of the work of Hemingway, who was known to be very fond of drinking wine. 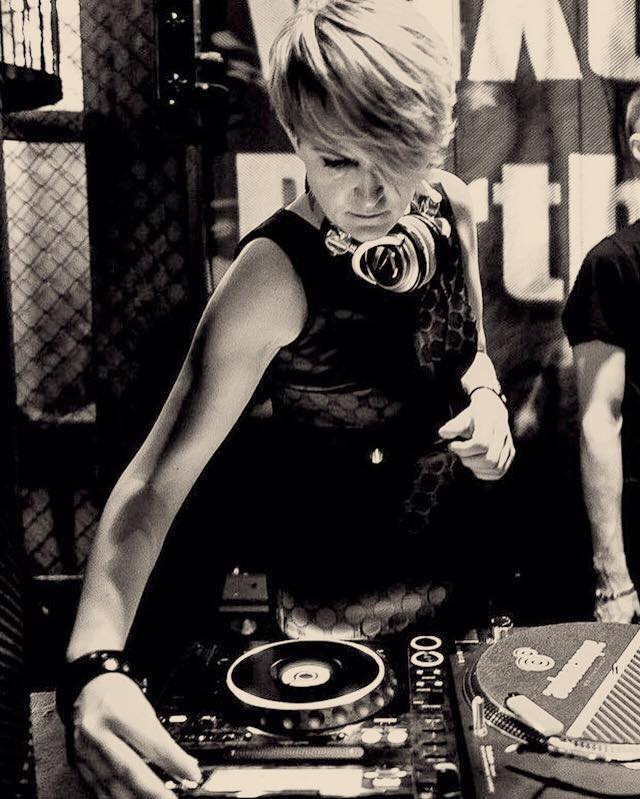 Having a big musical experience, how will you evaluate changes in techno music over the past 10 years?
– I like what’s happening in techno. The artists continue to “dig” seriously, looking for new sounds, techno stopped killing, it has become more like a journey into the world, different from routine life. This is already a mixture of ambient landscapes, unstraight rhythms, but there is always a feeling of power, structure. What I don’t like is that everyone plays techno, even if it’s a house or electro. Everything is being labeled as techno. House and electro are also beautiful styles, I do not understand why people, who play it, want that everyone thought they are techno-DJs. So accordingly, audience also has some “porridge” in their heads. There were occasions when people came up to me after house-set and said that they had not heard such a cool techno for a long time. And what can be the answer to that? I smile and say “thank you”.

What techno labels and producers are the most relevant to you now and who are your favorite artists?
– Guys from Schwefelgelb are absolutely incomparable. Artefakt‘s album has struck me right in the heart. The newest of Kangding Ray is perfect. Developer always creates incredible tracks and no less incredible vibe in the club. In fact, I don’t like to be sticked to labels and names, and even if the artist creates one track, but the one that hits my ear, my respect and appreciation will be unlimited.
Among favourite artists I’d name Karenn, Audion, Lucy, Oscar Mulero, Inigo Kennedy, Dasha Rush. In general, this is a list of artists who do not restrict themselves in style, you can dig deeper and discover new horizons.

Tell us about your latest EP on the Spanish label Different is Different Records. What’s behind this work and are you planning new releases in the near future?
– Yes, there will be a release on French Volute, more dub, house, but also with a techno remix on one of the tracks. And the Spanish release Rebel One will be out at the end of February. Basically, like any other of my tracks, included in this release, it’s an endless search for self-expression. Here I am more melodic, or restrained, or sharp. The release on Volute will be even political, to some extent , I use Martin Luther King’s speech as a sample and also interview with Marilyn Monroe.

Which event, where you performed, is most memorable at the moment?
– Defenitely, the last special event was an invitation to the London fabric. And I was invited to Dommune (Tokyo) earlier, which was a complete surprise to me.  There were many events in my DJ career that you recall during a long time, but it’s importantl to treat any with gratitude, even if it was not the best: experience is always an experience, without it there is no development and there is no quality.

You got your nickname Kamikaza for being extremely energetic.  Where do you get that power reserve, considering that you are constantly performing, organizing events, preparing radio broadcasts, and also family?
–  I do not know, actually. This energy is just here with me and it’s impossible to stop the flow of ideas and the desire to do something. The family is more likely to suffer, but they got used to it. I promise them that after 50 I will sit on the seafront and will nurse my grandsons and they will always know where to find me.

What are your hobbies and what do you like to do when you have a free time?
– I love traveling. If there is a moment, I rush to some new place. Even if it’s within the city I live. Especially as I moved to Georgia, the problem of finding, to investigate, completely disappeared.

Have you ever been to Ukraine, besides your performance on Kazantip in 2012? And what do you know about Lviv?
– Yes, I was and not once. Performed in Kyiv and Kharkiv, and went to Odessa to relax. Odessa is absolute love, I adore cities by the sea, it’s just like Riga, also has a coast, where you can always escape from the rush and meditate with a bottle of champagne. And I dreamed of getting to Lviv long ago, it’s geographically and architecturally more Western like, rather than Ukrainian cities which I visited.  On some photos it’s like old Riga, in such cities you always feel comfortable. All the friends who have visited Lviv, are talking with enthusiasm about the city, so I’m sure I’ll like it too.